As one of the largest authorised Cat equipment dealers in the world, with locations spanning NSW, ACT and WA, WesTrac has been known to set the benchmark in the machinery and construction industry for over 25 years.

WesTrac is not only committed to delivering outstanding value to their customers, but they are also striving to add value to their community. Currently, WesTrac employs more than 3,000 staff members, along with 140 apprentices enrolled in their nationally accredited training institute.

As WesTrac was preparing for an exciting upturn, the Executive teams wanted to take stock internally, learn what was working well, and what needed to change to support sustainable growth.

In 2015, the mining industry experienced an unfortunate downtrend. Consequently, businesses within the mining services industry also felt the ramifications. While many businesses struggled to stay afloat, WesTrac was skilful in its response and reduced its workforce by 30%.

By doing so, they were able to remain in operation, keeping over 3,000 people in jobs. Even though the redundancies were necessary, WesTrac employees became fearful, disengaged, and discretionary effort decreased. Over time, this affected safety performance as well as customer experience. As an organisation that values its people, culture was identified as a critical area that needed to shift.

“Our goal at WesTrac is to ensure that employees go home in the same, if not better state than when they arrived at work.“

It was very important for WesTrac to meet its goal of keeping their people safe, lowering incident rates and improving overall employee wellbeing.

To ensure that they had the best chance of succeeding with their endeavour, the Executive team invited Interchange to assist them in developing a one of a kind solution for this complex issue. 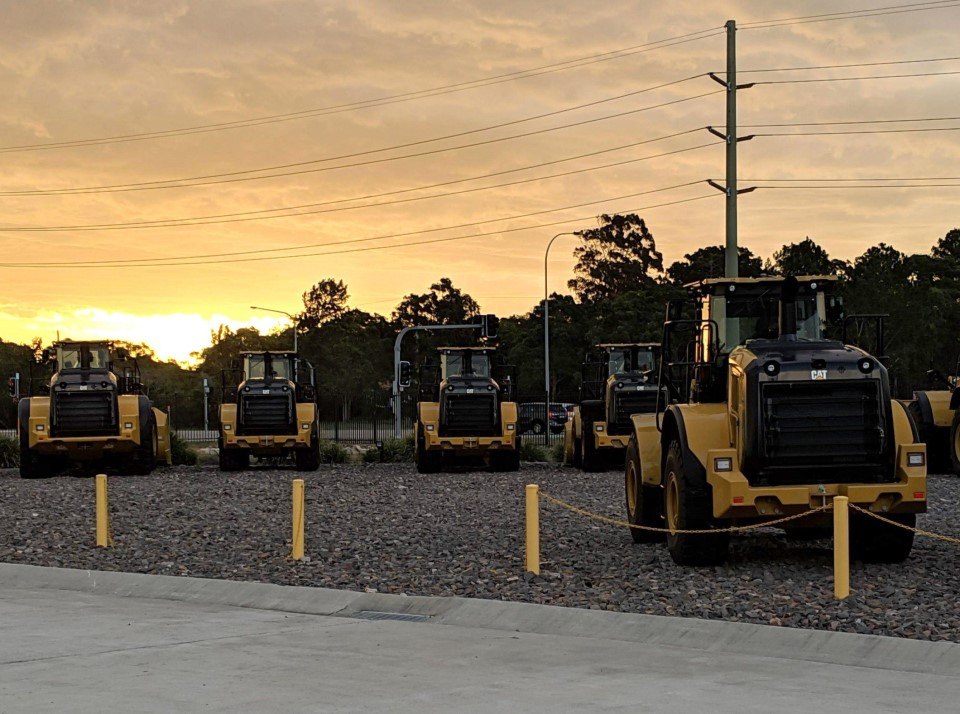 “WesTrac approached Interchange having witnessed the success of another one of our enterprise wide culture transformation projects.

Having met with the Executive teams and learning of their genuine commitment to make their business better – for their people, their customers and their community, this was something we knew we wanted to be a part of.

We commenced the project with alignment around our philosophy that culture is the driver and safety is an outcome.“

To fully understand the reasons behind the culture challenge, Interchange went through a comprehensive Discovery phase. This included an anonymous online survey, on-the-job observations, 1-1 conversations and focus groups, with a cross-section of the workforce.

From the raw data collected, 5 core themes were identified as the areas of opportunity for WesTrac, addressing accountability, recognition & feedback, teamwork, inclusion and leading change. These themes would go on to form the foundation of the solution.

To create the most comprehensive and successful initiative, Interchange took a Human Centred Design approach to the project. This methodology encouraged the collaboration between Interchange and WesTrac, and used the combined knowledge to design the most quintessential, tailored solution.

Throughout the design process, rapid prototyping was utilised by Interchange, allowing every aspect to be tried and tested, prior to cementing it as part of the solution.

“Across 16 design workshops with groups of WesTrac employees we tested and developed the content, activities and branding. What evolved was a cleverly constructed piece to meet the needs of the people.”

Following the collaboration with WesTrac, it was decided that the program would be labelled ‘Built By Us’. The title evoked a sense of accountability within the organisation, allowing every employee to feel involved in the transformation of their community.

Informed by current adult learning and cultural transformation theory, the program was shaped by a sophisticated methodology that we call E.L.I.T.E. The E.L.I.T.E method is a multi-phased approach, designed to take organisations through a culture transformation journey, over an extended time frame.

Woven throughout the Built By Us program were a series of activities, events, workshops and multimedia assets, each designed to engage the organisation, transform the culture and deliver improvements to safety performance. Some of these included:

Built By Us Branding

To create a strong and meaningful connection between the participants and the transformation to come, it was important to create a customised brand identity for the program.

Interchange worked collaboratively with WesTrac to produce a visual identity that not only reflected the individual brand identity of Built By Us, but also integrated seamlessly with the existing look and feel of the WesTrac brand. 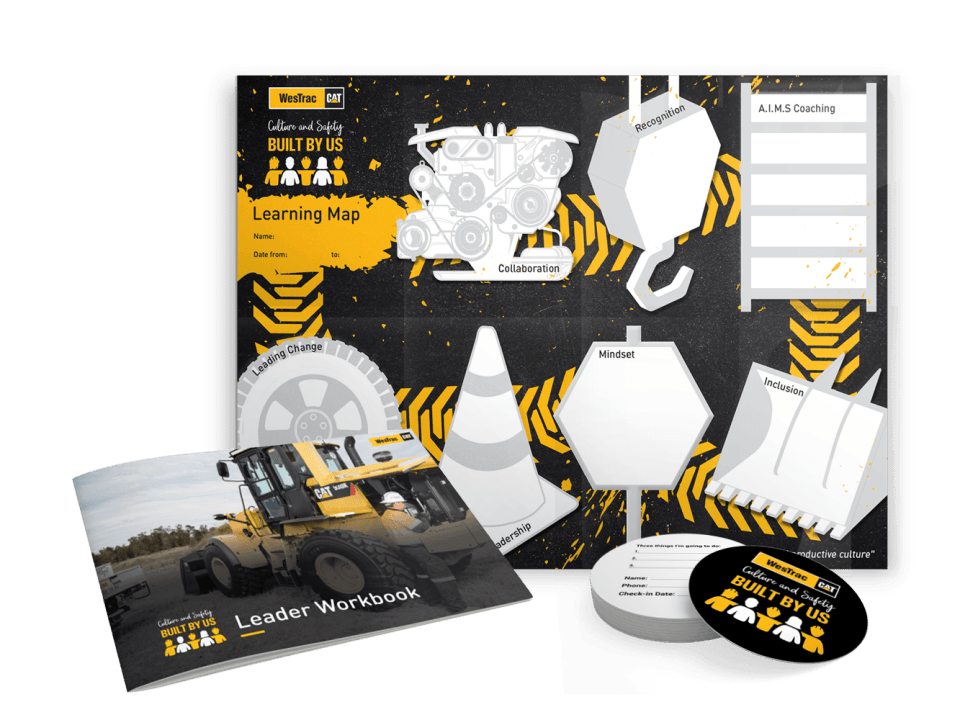 Our talented team of designers and creative consultants developed learning content, specifically for WesTrac, that would ultimately address the areas of opportunity.

The content was based on proven behavioural theories and frameworks and presented in ways that were best suited to WesTrac participants. The content incorporated engaging activities, which kept participants engagement levels high.

“In design, we stayed completely grounded in the wants and needs of the workforce and the content evolved from there. The program offered a clear and connected journey for participants as a result.”

Interchange learned that home and family life is very important to those at WesTrac. To generate excitement over the Built By Us program, Interchange drew upon this value and created custom video content, involving the families of WesTrac employees.

Team members were invited to bring their families to the WesTrac sites and give them a grand tour of the state-of-the-art facilities. 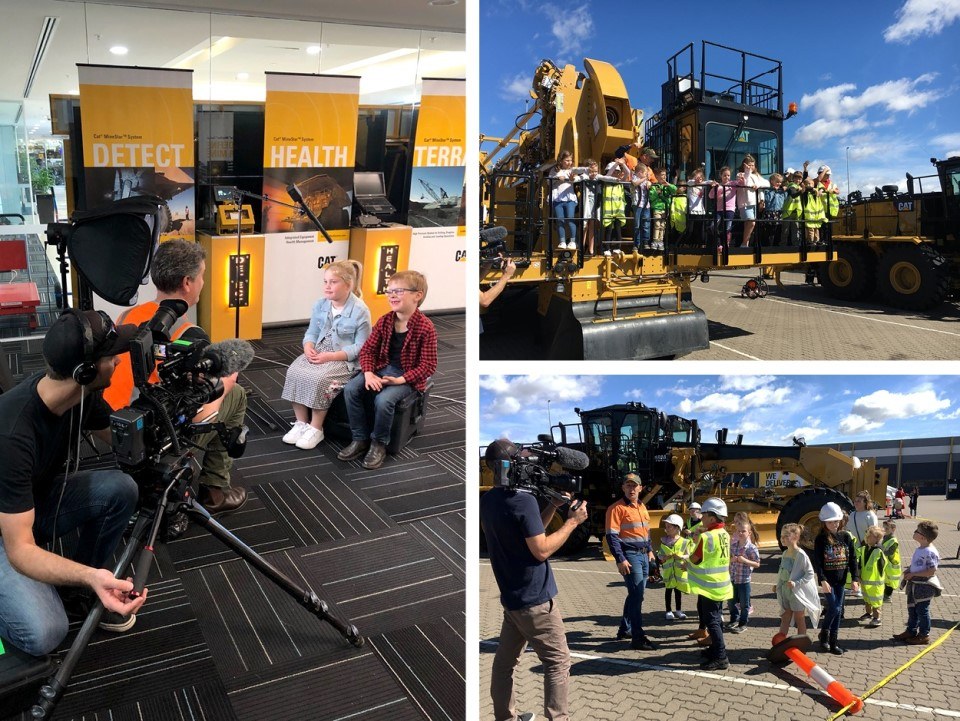 Interchange then conducted video interviews with the children, asking for their perception and opinions on workplace culture.

These interviews, combined with additional footage of employees opinions, helped to create an emotional connection with the program and display alternative perspectives of a complex issue.

This discussion style workshop was a unique approach for the participants, which resulted in high engagement levels and a personal connection to the material.

Interchange transformed one of the original WesTrac training rooms into a club-house style space, with elements such as a dartboard, gaming equipment, Nerf guns, a drinks fridge and comfortable high- backed chairs.

Instead of sitting at desks, the workshops were held in the armchairs, with the participants and facilitator sitting together, listening to each other’s stories and discussing the learning material.

The fact that the Built By Us training room was unlike any other environment at WesTrac, allowed the participants to leave preconceived ideas at the door and engage with the workshop with a relaxed and open mindset.

To further support and cement their newly acquired skills, people participated in two virtual coaching sessions with an Interchange Senior Leadership Coach. The leaders discussed any successes or challenges they had in regards to the strategies they have learned, and gain any feedback and advice to further develop their skills.

“As all leaders come work in different areas, the coaching sessions are very important to help integrate the teachings from the workshops, and make them applicable to different environments.”

Feedback on the program so far has been very positive, with WesTrac employees expressing their excitement about its initiation. An EOS (employee opinion survey) has recently been conducted throughout WA and NSW, with the intention of measuring employee engagement since the commencement of the program.

The results have been astounding, demonstrating an uplift in employee engagement in WA by 21% and in NSW by 16%. These figures have well and truly exceeded the expectation of the WesTrac leadership team who were aiming for a 5% increase.

People at WesTrac have become more engaged with their work, teams and leaders and have been feeling more valued since the decision to take action.

“Working with Interchange was a great experience for myself and the team. The level of creativity and expertise they brought to the project was exactly what we needed to make a real difference.

We can already see the shift in our culture and look forward to continuing in the direction we’re headed.”